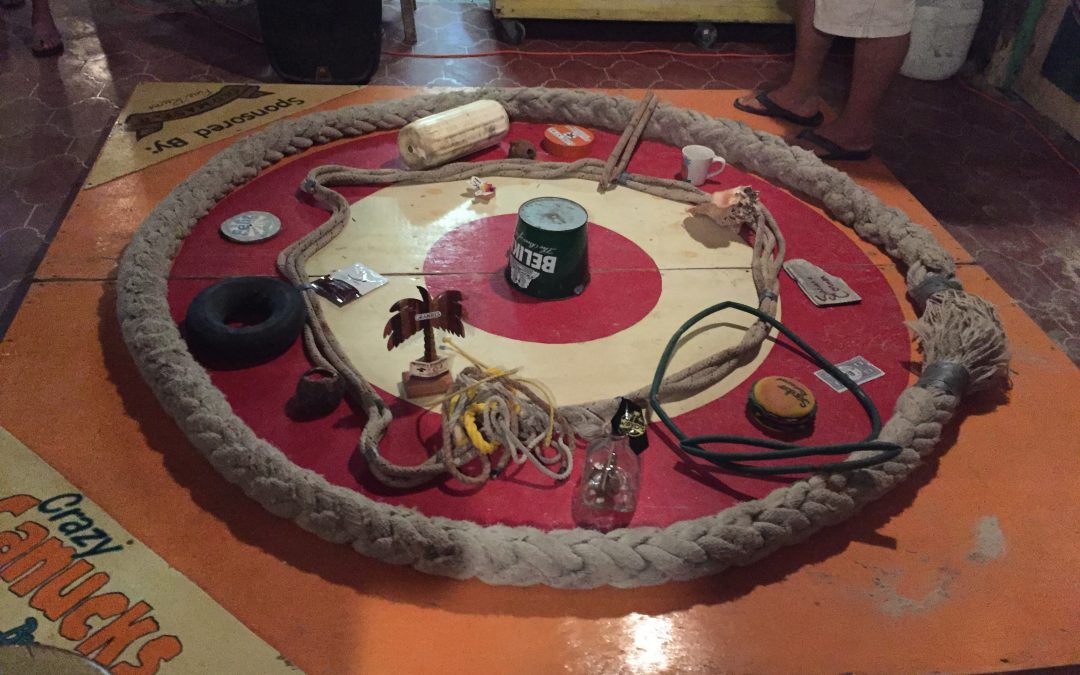 What do you get when you mix Money, Gambling, Charity, and Crabs?

One of the most popular events in San Pedro Belize on a Tuesday night is the local Hermit Crab races at Crazy Canucks. Featuring the delightful off-color commentary of the host and owner, Rob, for $5 BZ ($2.50 USD) you can pick your hermit crab and to use your creative skills to come up with a witty crab name.

The race track is set up as a circle with the crabs in the middle, and the goal is to pick a crab that will sprint its little hiney (Do crabs have hinies?) through the obstacles (which include prizes from businesses throughout island) and over the edge of the big rope. Be the first crab to make it 3 feet out of the middle of the circle and you WIN.

Every crab has a differentiating number, letter, or symbol tattooed on their shell, which was of course PETA approved.  The trick is to correctly choose the crab that is going to be as lively on the race track as they are in the plastic container that you pick them out of, as many crabs have been known to show off during the selection processes only sit on their ass and let you down in the main event.

The first night we are in Belize we stroll up to Crazy Canucks on Crab Racing Tuesdays. Our second race in, Rob announces “#33 Cierra’s Crab One Minute Man” and then proceeds to direct all the attention to me, and all I can do is shrug as Cierra proceeds to insist that it is unrelated to my libido and it is the Crab that is going to win in a minute flat.

As you probably guessed, One Minute Man was second to none and scurried past the competition to win first place!  Each race pays out as follows: 50% of the pot goes to the winner, 25% the pot goes to charity, and the remaining 25% goes to the Championship Race.  With an average of 10-15 crabs per race he ended up raising $239 Belize that night.

The main inspiration for the crab races and the other charity events that Rob puts on at Crazy Canucks is for the children of Belize.  As of October 2016 Rob and Crazy Canucks’ patrons have raised a total of $23,000 BZ for the kids. With a cause like that who wouldn’t want to have a beer and gamble on your favorite crab.

In the Video you will See Rob starting the Crab races out by introduction of the names. Then release the crabs with his live commentary.  #25 Cierra with Seabiscuit

In the second video you will hear our crabs announced as “#124 John with his Crab Dirty Sanchez” and “#50 Cierra with her Crab Cierra”  Listen for the joke as he is announcing the crabs. My crab #124 proceeds sit on his ass and be amused by the center of the ring while Cierra’s crab #50 goes out to the right of the screen and gets lost in the ropes.